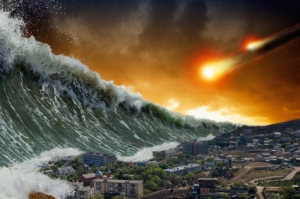 Here’s a first draft excerpt I wrote this morning from my Novel in progress ‘Freeman’s Ocean’ which is pertinent for today and contains a little future history as well:

A few generations back Stephen Hawking had staunchly ranted about how the species of man faced extinction if we didn’t get off this rickety blue planet soon and start colonizing the solar system. Recognized as being a pretty smart guy, his conjecture was believed by some and ignored by all.

That was until we were given a little extra incentive of the jump up and take notice kind. Our water planet had managed to absorb most of the small and not so small space rocks that found their way here. Then in 2034 a statistical anomaly occurred with the arrival of an M-type metallic asteroid dubbed 2034 AT7 (later named Ceresta) that chose to ignore the bell curve and slammed at a 47 degree angle into the city of Portsmouth, Virginia killing half of its 120,000 population and, just as an afterthought, took out most of the Norfolk Naval Shipyard. Forty three seconds later a splintered off chunk hit the Elizabeth River on which Portsmouth sits damming the river up and diverting it over to the city of Norfolk where a good share of the population there drowned in their sleep.

Funny thing. Over the next seven years the NASA-ESA budget tripled in size and commercial space faring and experimental rocket research really took off, funded in part by NASA-ESA’s swollen coffers.

Solar system exploration exploded as well with countless satellites, rovers, and probes of all persuasions sent to the planets and their respective moons. If it had even a remote chance of being populated by us, we headed over there with a vengeance to check things out.

The respective governments groaned under the economic repercussions of printing vast amounts of currency but, as they backlashed and began to tighten up the money spigot, the commercial end of exploration showed that they weren’t just interested in moving a few of us off planet. They were much more enthused about extraterrestrial resource development which really means finding stuff out there you could sell. The commercial end of things realized at the get go that if you’re going to ship people off planet you have to find a way to pay for it.  That’s why the infrastructure for a space mining industry was built much sooner than anyone had anticipated and the governments breathed a sigh of relief as they found a new mother load source of tax revenue.

First on the list were the top five bets for extraterrestrial life – Enceladus, Europa, Mars, Io, and Titan. That last destination may sound a little foolhardy since Titan’s temperature would freeze us into popsicles in a heartbeat but the organic compounds and energy resources we could live off of there were ridiculously abundant. So we decided to go anyway.

Enceladus and Europa were the top bets with Enceladus being the most likely life bearing body. We didn’t forget about Mars and eventually established colonies there. It’s just that Enceladus and Europa because of their small size would be the quickest to start populating, particularly with the Higgs mass generators available to make for a smoother adjustment to these small moon’s meager gravity wells.

Just because Enceladus had life, and possibly self aware life at that, was no deterrent. We’d do what we always did – populate and build relentlessly until we used up all of the bodies resources and then move on. Unless, of course, the resident life found a way to stop us which, from our past experience on Earth, we thought very unlikely.

Now here’s the dialog equivalent of the above narrative:

Eric said, “You remember reading about how Stephen Hawking used to rant continually about getting our butts off Earth? Sooner or later we’d all get wiped out.”

“Sure that’s history 101. All he got for his troubles was a yawn and a yeah maybe while they looked the other way,” Joan said. “Everybody pretty much ignored him, kept their heads down and relied on luck to get them through.

Then that asteroid. What was it called, Ceresta I think, hit in 2034 and wiped out Portsmouth in the middle of the night along with a good chunk of Norfolk on the opposite side of the river.”

“Now that was one hell of a wake up call. The only good thing to come out of that was funding tripled at NASA-ESA and they took off like a rocket,” Eric said. “No pun intended.

He looked puzzled for a moment and then laughed. Must be a cultural thing.

She continued on. “The commercial side of space humored NASA-ESA for awhile but they were much more interested in finding ways to move space rocks to sell to people just like themselves. Colonization was just a by product.”

“That was probably a good thing,” Eric said. “It paid back a lot in the long haul, and stopped us all from going broke from all the funny money that was printed to finance the big push.”

“Good point Eric. Turning over space to private enterprise is the real reason we’ll be taking a stroll on Enceladus in a just few minutes.”

The dialog version cut out a lot of hot air from the narrative and followed the rule of show don’t tell (kind of). But to tell you the truth I liked the narrative version better. Well they always say rules were meant to be broken. I’ll probably end up combining the two.

I've been interested in astrophotography for some time now and more recently began writing science fiction. Half a million words plus later, I continue to write every day. I share some of the things I learned along the way as well as some of my writing, plus an occasional astrophoto I’ve taken just for fun on my blog site Fictional Astronomer at www.rmurrr.com .
View all posts by Richard Murray →
This entry was posted in Writing Science Fiction and tagged astronomy, astrophotography, Science Fiction, SciFi, sf, writing science fiction, writing sf. Bookmark the permalink.