Posted on September 3, 2013 by Richard Murray 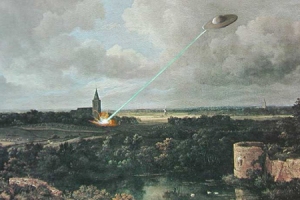 When you mention the words religion and hard sf in the same breath it brings to mind The Sparrow by Mary Doria Russell. Although technology is not central to the story, the passages involving linguistics come close to hard sf and the depiction of the aliens is remarkable .

A team of Jesuit priests make first contact with an alien species. The crew aboard the vessel destined for the Alpha Centauri system consist of the Jesuits, a variety of atheists and a Jew which makes for some fascinating character contrasts.

The aliens are carnivores who herd their prey and selectively breed them for adaptability, intelligence and well . . . tastiness. Only one person, a priest, returns alive from the mission. He is damned as a traitor by some and viewed as a saint by others.

The novel is at its core a respectful, thought provoking examination of faith and what it means in the face of adversity to question it, lose it, and regain it.

You may not agree with the novel’s religious or philosophical concepts but I can guarantee, whether you’re religious, agnostic or atheist, most who read it will be thinking about it long after they’ve finished and will gain from the experience.

An interesting side note is that in some respects this novel is an autobiography. The author is by trade a paleoanthropologist, has a catholic background, turned away from religion at the age of 15, came back to it as an adult and then converted to Judaism. A classic case of write what you know.

I've been interested in astrophotography for some time now and more recently began writing science fiction. Half a million words plus later, I continue to write every day. I share some of the things I learned along the way as well as some of my writing, plus an occasional astrophoto I’ve taken just for fun on my blog site Fictional Astronomer at www.rmurrr.com .
View all posts by Richard Murray →
This entry was posted in Writing Science Fiction and tagged astronomy, astrophotography, Science Fiction, SciFi, sf author, sf writer, Write, writing. Bookmark the permalink.